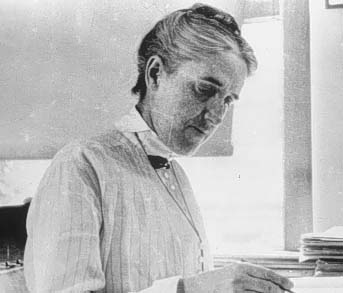 Henrietta was an American astronomer and a graduate of Radcliffe College. She was also deaf. Like many of the women of the time, she went to work at the Harvard College Observatory to count stars on photographic plates, earning $10.50 a week. She catalogued thousands of variable stars in images of the Magellanic Clouds and in 1908 published her results in the Annals of the Astronomical Observatory of Harvard College, noting that some of her variable stars showed a pattern: brighter ones appeared to have longer periods. After further study, she confirmed in 1912 that the variable stars of greater intrinsic luminosity – Cepheid Variables – did indeed have longer periods, and the relationship was quite close and predictable.

The discovery became know as the 'Period-luminosity relationship’ which became an important way of measuring distances in the Universe. One year after Leavitt reported her results, Ejnar Hertzsprung determined the distance of several Cepheids in the Milky Way, and with this calibration the distance to any Cepheid could be determined. The discovery became the basis for the work carried out by Edwin Hubble, who showed Cepheids to exist in galaxies outside of our Milky Way, and which radically changed the theory of modern astronomy.

She also developed a standard of photographic measurements that was accepted by the International Committee of Photographic Magnitudes in 1913, called the Harvard Standard.  To do this she used 299 plates from 13 telescopes and used logarithmic equations to order stars over 17 magnitudes of brightness. She continued refining and enlarging upon this work throughout her life.

During her career, she discovered over 2,400 variable stars, roughly half the known total in that era.
Even though Leavitt worked sporadically at Harvard due to health problems and family obligations, she was made head of stellar photometry in 1921 by new director Harlow Shapley. However, by the end of the year Leavitt passed away, suffering from cancer. However, unaware of her death, the Swedish mathematician Gosta mittag Leffler considered nominating her for the 1926 Nobel Prize in Physics and wrote to Shapley requesting more information, but the Nobel Prize is not awarded posthumously.

The asteroid 5383 Leavitt and the lunar crater Leavitt are named in her honour.