Cecilia was an English-American astronomer and one of three children. She won a scholarship to read botany, physics and chemistry at Newnham College, Cambridge University in 1919, where her interest in astronomy was sparked by a lecture given by Eddington, on his eclipse expedition to Africa as a test of Einstein’s general theory of relativity. Although she completed her studies, Cambridge did not grant degrees to women at this time, although she was elected a member of the Royal Astronomical Society while still a student at Cambridge. 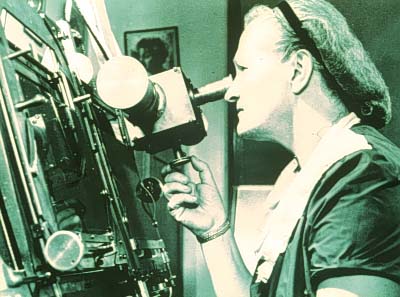 Having met Harlow Shapely of Harvard College observatory, she left England for the US to persue a graduate program in astronomy. Payne was the second student, after Adelaide Ames, to join a fellowship program at the Observatory to encourage women to study there. She became the first person to earn a PhD in astronomy from Radcliffe for her thesis "Stellar Atmospheres, A Contribution to the Observational Study of High Temperature in the Reversing Layers of Stars". Astronomer Otto Struve characterized it as "undoubtedly the most brilliant Ph.D. thesis ever written in astronomy". Her work allowed her to relate the spectal classes of stars into actual temperatures. She also showed that the variation in stellar absorption lines was due to differing amounts of ionization that occurred at different temperatures, and not due to the different abundances of elements. She also correctly suggested that silicon, carbon, and other common metals seen in the Sun were found in about the same relative amounts as on Earth but the helium and particularly hydrogen were vastly more abundant, by about a factor of one million in the case of hydrogen, concluding that hydrogen was the main constituent of stars. However, she is not fully credited with the discovery because her male superiors convinced her to retract her findings on stellar hydrogen and publish a far less definitive statement. By the time she was awarded her PhD she had also already published six papers on stellar atmospheres, all by age 25. By the time of her death she had published over 150 papers and monographs.

Payne married in 1934 and had three children, but remained scientifically active throughout her life, spending her entire academic career at Harvard. However, she received little pay, and despite her work, had a low status and held no official position, serving only as a technical assistant to Shapely from 1927-1938. In 1938 she was given the title of astronomer, and once Donald Menzel took over as Director in 1954 she became the first female to be promoted to full-professor from within the faculty at Harvard's Faculty of Arts and Sciences. Later, with her appointment to the Chair of the Department of Astronomy, she also became the first woman to head a department at Harvard.

After her thesis Payne contined to study stars of high luminosity in order to understand the structure of the Milky Way. Later with her husband, she surveyed all the stars brighter than the tenth magnitude. She then studied variable stars, making, with her assistants over 1,250,000 observations. This was later extended to the Magellanic Clouds, adding a further 2,000,000 observations of variable stars. This data was used to determine the paths of stellar evolution.

Payne-Gaposchkin’s PhD is considered by many as the turning point of the Harvard College Observatory, and of women in astronomy, allowing women to enter the mainstream world of astronomy. She received the Annie Cannon Award in astronomy in 1934 for her work.

The asteroid 2039 Payne-Gaposchkin is named after her.