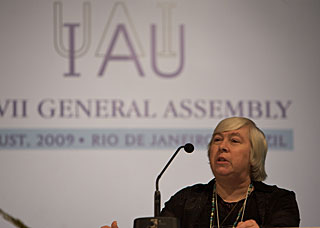 The Chair of the ‘She is An Astronomer’ Task Group, Dr Helen Walker, from STFC’s Rutherford Appleton Laboratory (RAL), successfully presented RESOLUTION B4, On Supporting Women in Astronomy to the International Astronomical Union (IAU) General Assembly in Brazil on 13th August.

In her speech to the Assembly, Dr Walker said,  "Let us assume, no, let us assert that women are as capable as men of doing science, and that women do good science too.  In an ideal world the mix of men and women doing astronomy would be 50-50.

"If we look at this General Assembly, there are a lot of women present, and yet... I have the numbers from the National Organising Committee - 667 out of 2109 participants are women - 31.6%. Were 30% of the speakers women in the sessions you attended? 30% of the invited speakers? 30% of the session chairs?

"So, what to do? There has been no previous resolution concerning support for women in astronomy. The IAU has passed non-target-specific resolutions before, for example the Washington Charter on communicating astronomy to the public, and education-related resolutions. We know one size does not fit everyone - each individual IAU member and each National Representative knows their community and where their effort should be best focussed - school, university, early-career, late-career - where support and encouragement is most needed in their community.

"We need more astronomers. We need good astronomers. The IAU strategic plan for example will need a lot astronomers. Science is advanced by having the largest possible pool of astronomers, and we are currently fishing in a pool with too few - a significant fraction is missing, so let us increase the pool. Please support Resolution B4 and support them."