'She is an Astronomer': What is your current position?

Sera Markoff: I am what is called a "universitair hoofddocent" in Dutch, which roughly translates to senior lecturer in the UK system, or associate professor in the US. My current research focuses mainly on the accretion process around black holes of both the stellar remnant and supermassive scales, and in particular the formation of relativistic jets of plasma. I am also generally interested in what is now called astroparticle physics, such as studying how these jets manage to accelerate particles to extremely high energies, and modeling various emission scenarios. Most recently I have gotten involved in several observational programs such as the development of the Low Frequency Radio Array (LOFAR) and the Cherenkov Telescope Array (CTA).


SIAA: How long is it since you got your maximum degree?

SM: I finished my PhD in 2000 at the University of Arizona in the Theoretical Astrophysics Program, a joint program between Astronomy, Physics and the Lunar/Planetary Lab that also includes the space plasma group. My PhD research focused on modeling potential sources of gamma-ray emission discovered from the Galactic Center with the EGRET instrument. I mainly focused on modeling hadronic interactions in various candidate sources such as Sgr A*, our Galaxy's supermassive black hole, and Sgr A E, a nearby supernova remnant. For my first postdoc, I took an Alexander von Humboldt research fellowship to the Max Planck Institute for Radio Astronomy in Bonn, Germany. For my second postdoc I returned to the US in 2002 with a National Science Foundation Astronomy & Astrophysics Postdoctoral Fellowship, that I took to MIT, where I had been an undergraduate so it felt a bit like coming full circle. In January 2006 I moved to the University of Amsterdam. 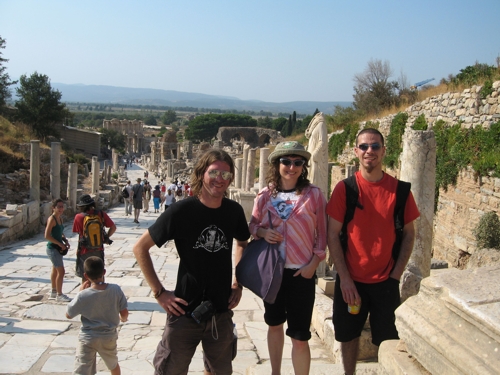 SIAA: What stage of your career have you reached?

SM: Currently I lead a research group including 1 postdoc, 2 PhD students, 3 Masters students and several shorter term undergraduate researchers. I also teach classes at both the undergraduate and graduate (Bachelors and Masters) levels. The picture shows me at a conference in Turkey this past September (2008) with two of my students at the time.


SIAA: Do you feel it was more difficult for you to get a job or a promotion in comparison with male astronomers? Are women under-represented in your institution?

I consider myself very lucky to be at a great institute of high scientific caliber, that is also supportive of women. I have not felt that my gender has been an issue, and I have been promoted on a reasonable schedule. At the moment, two members of my group are female, and I always try to keep an eye out for good female candidates. Women are extremely under-represented in our institute, and in the Netherlands as a whole. At the moment I am the only female member of the faculty in our institute. Contrary to popular myth, the Netherlands is rather socially conservative when it comes to women working, and we have the lowest level of tenured female professors in the EU! I am actively trying to change this at the science faculty of our university, and have formed along with several other colleagues a new Network to advocate for women's issues here. It is a stark contrast to the US, where the percentage of female astronomy PhD students is almost 50%, and the level of female assistant professors is typically 20-30% at most astronomy institutes by now.


SIAA: What is your family status?

SM: I have a partner who is also an astronomer, and we were very lucky to get offers for dual positions both in the US and Europe. I am also very lucky that he was willing to move overseas with me. I think especially in the US the community is very aware of the "two-body problem" and increasingly supportive of the idea of dual hires, but the EU is definitely lagging in that sense. We do not yet have children, but the idea is on the table and one of the (several) reasons we chose to come to Europe was because of the significantly better health and childcare benefits compared to the US. Maybe Mr. Obama will change these things (one hopes!) but it is appealing to know that you can take 16 weeks maternal leave here if you want. Most of my (all male) colleagues have children, and take one day a week off as a family day, so I should be able to do the same thing. Having an academic partner is nice too in that his schedule is also flexible, so we can juggle the childcare responsibilities easier than if we both had "straight" jobs.


SIAA: How many hours a day to you normally dedicate to work

SM: I do work a lot, and I am still struggling to find a reasonable balance between my new responsibilities as a group leader plus teaching, with having a life and actually seeing my partner. I probably work something like 50-60 hours a week, though it is hard to say exactly since I often work odd hours in the night so it gets mixed up with my personal time. While this may sound like a lot, it is important to note that when you love what you do and are invested in it, working does not really feel like work. During my university years I had to work all sorts of jobs during summers to help pay my way through school, and I can tell you that sitting at a desk doing a boring office job, or standing on one's feet waitressing, for 8 hours feels a lot longer than spending that much time doing cool astronomy research! I love the excitement of doing cutting edge research, and I have the privilege of working and interacting with very interesting and unusual people. I may not get paid as much as a banker, but I have a lot more control over my life, a very flexible schedule (I tend to start work at 11:00 and work late), I can dress however I want, and I get to travel all over the world for free! These freedoms are very important for me, as is the excitement of doing something different every day. I still manage to find time to pursue my external interests at some level, which include music, traveling, cooking, dancing, reading and cinema.


SIAA: What recommendation would you make to young women starting their career in astronomy?

SM: To young women out there considering a career in astronomy, I would say go for it! You can always do something else later if you change your mind, and an education in physics and/or astronomy will generally not hurt your career chances because you learn many important skills such as (usually) coding, system managing, time management, communication and teaching. I do think you have to be realistic about your needs, though.

To get a permanent position in the EU it is almost always necessary to do at least one postdoc if not more of your training in a different country. You need to be open to the idea of traveling, and if you are already in a serious relationship this can be difficult. In that case I generally advise my (male and female) students to make the sacrifice of being apart during the student/postdoc years, which are limited, rather than try to stay together for each position the entire time. Better to allow yourself the freedom to get the best PhD and postdoc positions you can, because this will give you more chances for permanent positions and ending up where you want to be.

Academia is also not really a job for the faint of heart. You need to be able to communicate well, give good talks about your work, collaborate with people, and if necessary fight with old cranky men about your research! It may sound scary but most of us grow into this over time, and if someone had told me 15 years ago where I would be today, I would never have believed them. Finally, never be afraid to ask questions and get the help you need. I think women are particularly vulnerable to worrying about being perceived as stupid, but the only stupid question is the one you don't ask. So make sure you learn to seek out help, and accept help when offered. Find mentors, informal or formal, and pursue good social interactions with your colleagues. It will make work pleasanter, and help you network, which is also an important aspect of any career.